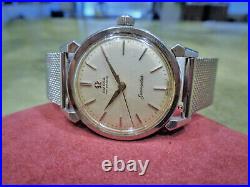 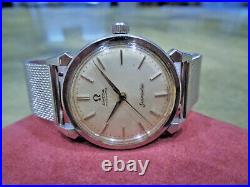 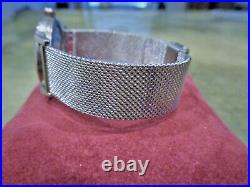 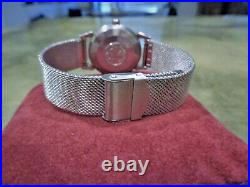 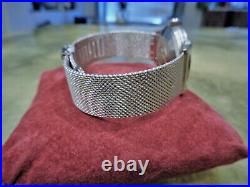 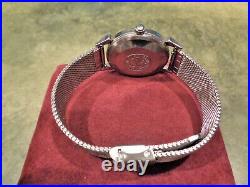 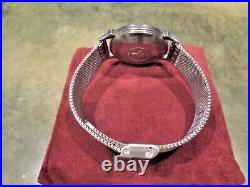 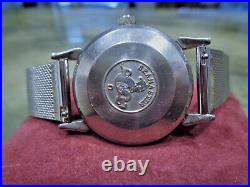 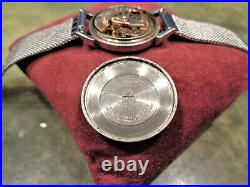 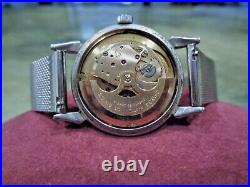 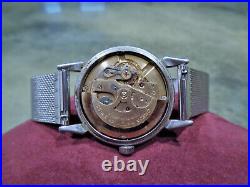 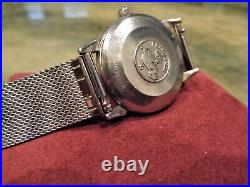 U p for sale is Vintage Gents 1958 Omega Automatic Seamaster with Jumbo Seahorse Logo & Rare’Spider’ /’Dog Leg’ Lugs and 501 Caliber / Movement Swiss Ref 2984 Watch in Great Cosmetic and Working Condition. Dial never reworked and case has never been polished. Watch case measures 33.8mm. Case and band measure 9 1/4. Omega watches began in a small workshop established by Louis Brandt in La Chaux de Fonds, Switzerland in 1848. When he passed away in 1879, his sons quickly stepped in to carry on their father’s vision. In 1885, the brothers released their first mass-produced caliber, the Labrador, and in 1892, they developed the first minute-repeating timepiece. Only two years later, they launched the 19-line Omega Caliber, which sent ripples throughout the watchmaking industry and would soon give the company its name. In 1905, Omega took on a role as the official timekeeper at sporting events throughout Switzerland, and in 1932, it acquired one of its most vital timekeeping partnerships-the company earned its title as the official timekeeper for the Olympic Games in Los Angeles, California. The partnership continues to this day, having served as the official timekeeper for over twenty Olympic Games. Just a little over a decade later in 1948, Omega watches introduced the first edition of one of its most symbolic watches: the Seamaster. The first Seamaster was rolled out to celebrate the company’s 100th Anniversary. To this day, the model is still one of the most respected watches in the Omega family. N 1962, Omega made history when astronaut Wally Schirra wore a Speedmaster on his Mercury Sigma 7 Mission, making it the first Omega watch to enter space. Just three years later, the company received a significant endorsement from NASA, which solidified the Speedmaster as the official chronograph for American space missions. In 1969, the Omega Speedmaster was a part of the first trip to the moon, worn on the wrist of Buzz Aldrin. And in 1970, the Speedmaster was crucial in helping the astronauts of the Apollo 13 mission return home safely. Even today, Omega and space programs worldwide continue to work in tandem to create some of the most effective tools for the trade. Omega earned widespread popularity in the 1990s as the official watch of James Bond after an Omega Seamaster appeared on the wrist of Pierce Brosnan. Whether it’s space, sports or pop culture, Omega has easily preserved its reputation as one of the greatest watch brands in the world. The brand started out as Louis Brandt & Fil. This was the original name of the company when it first founded at the end of the nineteenth century. However, it wasn’t until the release of the Omega Caliber that the brand really started to take off. In order to take advantage of the popularity of this movement, the company decided to rebrand itself as Omega Watch Co. In 1969, President Nixon famously turned down the opportunity to be gifted the first ever all gold Speedmaster Professional Deluxe because he deemed it to be too valuable. Al Pacino’s lead character in the hit film Scarface, Tony Montana, sported an Omega La Magique on his wrist during several scenes. Only 261 of these watches were ever made. In 1984 and then again in 1990, Omega created two special collections as a tribute to the brand’s founder Louis Brandt. Ringo Starr was a famous fan of Omega. He sported a digital Omega watch: the Time Computer LED, which was made in 1973-Omega’s first ever LED watch. It has 30 carats, 146 trapeze and Baguette diamonds on the dial, 459 Wessleton diamond and a case made from the finest 18-carat white gold. Former Soviet President, Mikhail Gorbachev, wore an Omega Constellation. It was a gold and steel model from 1982 called the Manhattan-the first Constellation watch with claws holding the sapphire crystal in place. Cindy Crawford, one of the most successful and iconic supermodels of all time, is Omega’s longest standing ambassador. A self-professed watch nerd, she’s been an ambassador for the brand for more than 20 years. Amassed a large fan base during WWII. Thanks to their accuracy, durability and extreme water-resistant properties, the watch became a popular choice among global military units. Omega was the only watch to survive NASA testing. The Omega Speedmaster Perpetual Calendar is Omega’s most complicated watch-regarded in the watchmaking community as the king of complications. Only 50 of these models were ever produced. Each watch can require up to 500 hours to make. The true value of an. Can be found in the dedicated manhours that it takes to produce one from start to finish. Aside from politicians and astronauts, the love for this brand also runs deep throughout celebrity circles across the world. Some of Omegas biggest fans include Tom Hanks, Rory Mcllroy, Elvis Presley, Prince William and Michael Phelps. My descriptions and numerous clear pictures are absolutely accurate and I do my best to be perfectly clear and concise. This item is in the category “Jewelry & Watches\Watches, Parts & Accessories\Watches\Wristwatches”. The seller is “cnjdealtime” and is located in this country: US. This item can be shipped to United States, Canada, United Kingdom, Denmark, Romania, Slovakia, Bulgaria, Czech Republic, Finland, Hungary, Latvia, Lithuania, Malta, Estonia, Australia, Greece, Portugal, Cyprus, Slovenia, Japan, China, Sweden, Korea, South, Indonesia, Taiwan, South Africa, Thailand, Belgium, France, Hong Kong, Ireland, Netherlands, Poland, Spain, Italy, Germany, Austria, Bahamas, Israel, Mexico, New Zealand, Singapore, Switzerland, Norway, Saudi Arabia, United Arab Emirates, Qatar, Kuwait, Bahrain, Croatia, Republic of, Malaysia, Chile, Colombia, Panama, Jamaica, Barbados, Bangladesh, Bermuda, Brunei Darussalam, Bolivia, Egypt, French Guiana, Guernsey, Gibraltar, Guadeloupe, Iceland, Jersey, Jordan, Cambodia, Cayman Islands, Liechtenstein, Sri Lanka, Luxembourg, Monaco, Macau, Martinique, Maldives, Nicaragua, Oman, Pakistan, Paraguay, Reunion, Uruguay.