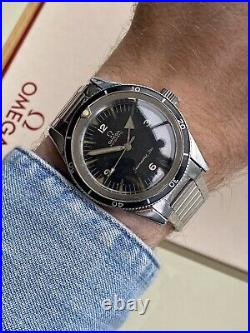 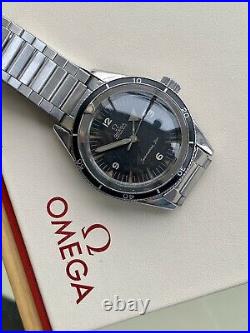 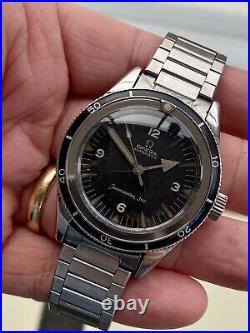 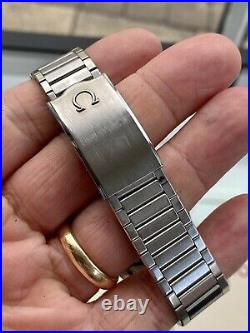 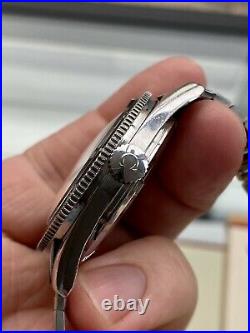 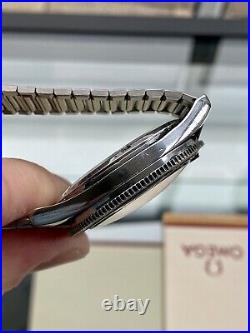 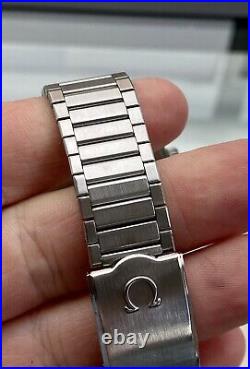 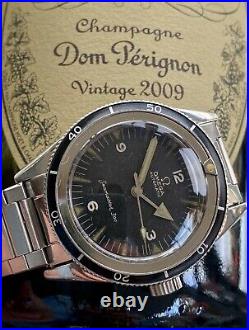 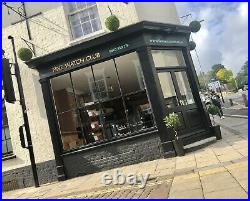 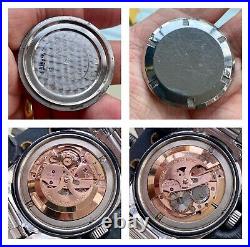 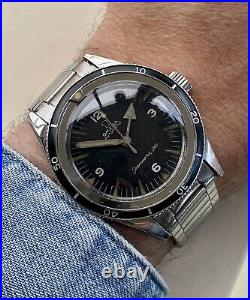 Omega Seamaster 300 Steel Mens 14755 62 SC Automatic Vintage Divers Rare Watch. VERY rare investment worthy Seamaster 300 case ref 14755. Rare original bracelet included. Nice Condition and serviced. Automatic movement using the legendary 5 Series. Good size for vintage at 38mm Jumbo divers watch. Iconic Seamaster 300 rare collectors model. A simple stunning and classy watch. The 38.5mm cased watch is classed as a “Jumbo” in the vintage watch industry. Therefore those who like the idea of a owning vintage watch but have concerns with the size perhaps this is for you. The Omega Automatic Seamaster 300 was specially designed for professional and amateur divers. Although originally guaranteed waterproof to a depth of 200 metres, the model was named Seamaster 300 instead of Speedmaster 200 because its performance was far beyond the capacities of the testing devices of the time. This outstanding result was essentially due to the high-resistance of the crystal and the Naiad crown. Please be realistic in regards to condition, do not expect mint. Naturally there will be some age related imperfections but overall good condition especially for a watch which dates back to 1962. All original parts except the bezel insert looks to have been replaced some time ago. Most of these are missing the original steel bracelet but not this one. The seconds hand sweeps around nicely. It’s Automatic and will have very good reserve power and fully serviced – no battery needed. Next sevice due in approx 5-7 years so nothing to do apart from enjoy! The watch would look equally stunning in a vintage tan brown / dark brown black strap. We can include a good quality leather strap of your choice. Please message us shortly after checkout with your choice. Case Width : 38.50mm (41.50mm with crown included). Dial: Black – naturally faded over time. Automatic – Calibre 552 engine. December 2020 (by a local watchmaker in Norwich). Band / Strap: 18mm Stainless Steel Omega stamped ST. 1311.742 (42) and working as it should. Rest of World: 2-3 days. They hold their value brilliantly and should actually increase in value over the next few years as they become rarer and rarer. A vintage watch in this condition and serviced by a Omega specialist is very difficult to find. Basically a subtle way to show off the exquisiteness of good taste. Fine Watch Club are used Watch Dealers based in Norwich, England. You will receive very fast. Some trivia on Omega watches. In 1848 a 23 year old named Louis Brandt is credited with starting the brand which later became Omega. In the early 1900’s OMEGA’s watches were prized by railroad professionals in China, the United States, Canada and much of Europe. The association between OMEGA and swimming dates back to the 1932 Los Angeles Olympic Games. The relationship is still going strong. Omega was a major supplier of watches to large ministries of defense, especially during the 1st and 2nd World Wars. The company’s timepieces would go on to be used by the armed and special forces of British, France, Italy, USA, Norway, Sweden, Canada to name a few. Important musicians including Elvis, Beatles members & Buddy Holly have been photographed wearing Omega watches including the Constellation range. Past world leaders such as JFK and Mikhail Gorbachev choice of watch. Pope John Paul II wore Omega watches. Before official chronometers, Olympic chronographs or the NASA-approved Speedmasters Omega watches. In 1947 Omega introduced the Seamaster Cosmic Moon Phase wristwatch. It was the brands first calendar watch to display the time and the date with its hands and day. The Geneva Line, created in 1953, was made as an homage to our workshops in Geneva where OMEGAs best regulators were working. The line was finally discontinued in 1979 as the law in Geneva stipulates that a brand must have a presence in the canton of Geneva to include the word Geneva or any variation of on the dial. Omega has four main vintage watch families today that are well known to everyone interested in the brand: Seamaster, Geneve, Constellation and De Ville. OMEGA SEAMASTER DE VILLE: The Omega De Ville was introduced into the Seamaster range in 1963. It was considered by Omega to be the ultimate dress-watch, the personification of elegance, but retaining the country sport mantra so eagerly aspired to by certain echelons of society in the 1960s. Although subtle and understated, at its heart remained a very sturdy accurate sports movement in a unique one-piece case. The Omega Seamaster was introduced in 1948. The De Ville version of the Seamaster featured a front-loading case where the access to the movement was gained through the front of the watch rather than the back. The Seamaster De Ville was available from 1963. The item “Omega Seamaster 300 Steel Mens 14755 62 SC Automatic Vintage Divers Rare Watch” is in sale since Tuesday, January 5, 2021. This item is in the category “Jewellery & Watches\Watches, Parts & Accessories\Watches\Wristwatches”. The seller is “fine-watch-club” and is located in Norwich. This item can be shipped worldwide.